The latest step on the road to transplant

Today I had an MRI of my abdomen to measure my liver and look at my bile ducts and such in preparation for donation. This was the second to last step that needs to be taken before I can donate. I still need to have a consultation with the transplant surgeon but that will be happening with in the next week I believe. Then on the 5th of next month Eden will go in for her next clinic visit and at that time I believe we will be setting a date for surgery. I am anxious to get on with the transplant as I know this is the only way Eden will get better, but at the same time it terrifies me. All the what ifs keep going through my head and I look at her and see how happy she is and wonder if this is right time for this. But then again I don't want to wait until she is extremely ill for her transplant to occur. It is hard to believe sometimes that she is sick, but I believe it is her happy, feisty personality that will get her through this. As for me, there is not much else I can do but put my trust in God and let Him work this modern day miracle because that is truly what this is. How else would you describe being able to take a portion of my liver and put it into her little body and have it work for her? For those who think that God no longer performs miracles think again.

Ok enough of my ramblings here's a picture for you... 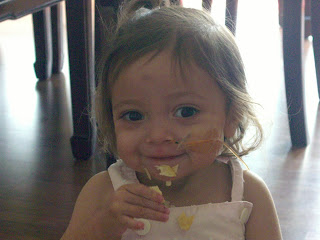 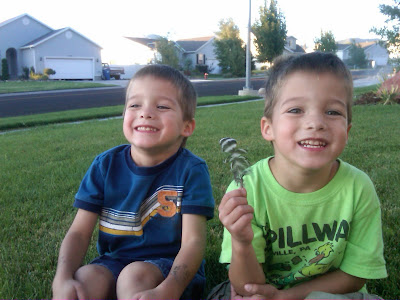 Sunday The boys came downstairs there is a skunk leaf outside. A what? a skunk leaf. It is black and white. Okay let's look. It is a feather. It's from a bird not a skunk.
Posted by Douglas Lai at 7:09 PM 4 comments:

So after spending an exciting labor day weekend at PCMC with Eden she is getting set free today. They are calling her mystery fevers which had no other symptoms other than slightly elevated labs colangitis. So as protocol she is being sent home with a PICC line and IV antibiotics for 10 days. The funny thing is she hasn't acted sick through any of this. Just all smiles as usual. Silly girl. Hopefully this is the last hospital stay before transplant.
Posted by Erica at 2:23 PM 1 comment:

Up at pcmc as Eden has a fever. Hopefully just observe for 24 hours then home.
Posted by Douglas Lai at 6:19 AM 1 comment:

So much has happened in the past few weeks. Eden was officially placed on the wait list for a liver transplant. She had an echo that showed her right coronary artery connects in an unusual location which would be no big deal except that it is close to her pulmonary artery. So now cardiology wants to follow her on a yearly basis to make sure it doesn't get kinked off by the pulmonary artery.
Now for the good news. My CT scan showed that the anatomy of my liver is suitable for living donation. So although I still have a few more tests and appointments I should be able to donate a piece of my liver to Eden. Dr Book said that we will likely do the transplant in October. That is only a month away! Very fast, but I would rather do it now while she is still stable and her recovery will likely be better. So that's the condensed version of what has been going on with Eden.

As for Seth and Ethan they started back to preschool on Monday. They weren't nearly as excited as last year, but still they were looking forward to it and walked right on into their classroom with out looking back.
Posted by Douglas Lai at 8:18 PM 4 comments: